Back to OUR CIRCLE 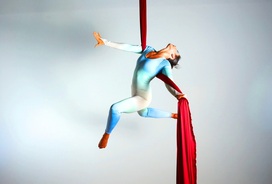 Ana is a professional aerialist who has been working in the circus industry in various capacities since 1997. Fusing her academic knowledge in Kinesiology with a strong athletic background and a passion for performance, Ana has enjoyed both instructing and performing with some of Canada’s finest circus companies. Some of her latest credits have seen her performing at the Air Canada Centre, Rogers Centre (Skydome), and other venues throughout Canada and the U.S.  Recent show clients include; Virgin Records, Rogers, and LiveNation.

Ten years of assistant-coordinating a summer circus camp under Cirque du Monde’s Marsha Kennington have given Ana valuable experience teaching children and training new instructors. She also spent four years teaching at the Toronto School of Circus Arts, two years at Hangtime Circus, and has been doing private instruction and workshops across Canada since 2004. Since 2006 Ana has enjoyed teaching for some of Canada’s best social circus programs, working with youth at risk in both urban settings and northern reservations. Some of these programs include work with Green Fools/Calgary Children’s Festival in BC and Alberta, as well as with Neal Rempel/Winnipeg Children’s Festival in Manitoba.  In 2008 Ana co-founded/coordinated Hawaii’s first annual International Adult Circus Retreat to rave reviews, with continued success in 2009. She has also worked at Toronto's annual CNE since 2008, teaching a variety of skills in workshops "Under The Little Top", with Kristi Heath and Greg Tarlin.

In addition to circus being a fun and fantastic physical activity, Ana finds that circus disciplines easily lend themselves to teaching important themes such as empowerment, teamwork, perseverance, and balance.  Ana is extremely passionate about teaching; she loves teaching all forms of circus and helping students of all levels push the boundaries of what they thought they were capable of.