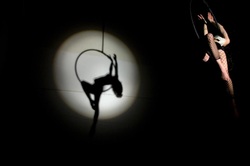 Angola's childhood was spent mostly upside down, dancing and doing gymnastics.  She has trained and performed in a multitude of movement disciplines including over thirteen years of capoeira, aerial circus and hand balancing. Angola has toured her solo show Twist of Fate about her triumph over scoliosis of the spine, and was awarded “most heart-felt dance show 2008” by the Globe and Mail. She is an international performer. Some highlights include: Cirque Pacifica (Maui), Le Chic (Hawaii), Waiting for Calder (Art Gallery of Ontario), Planet Power (HarbourKids), Slambovian Circus of Dreams (New York City), and a 4-month tour with Caravan Stage Company (Europe). Angola has completed the highest level of professional circus coaching certificate at the National Circus School in Montreal.  She has taught circus workshop and classes all over the world including Hawaii, New York City and Cape Town, South Africa (Zip Zap Circus). Lookup theatre has a mental healthy circus troupe that works with youth in the mental health community. They have created an anti-stigma mental health circus show that tours around high schools in Toronto. Lookup also has a youth group in rural Grey-Bruce County that performs show at rural festivals in the summer.