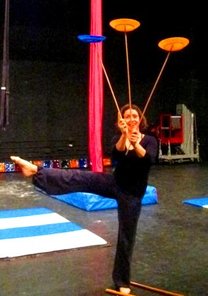 ​Rebecca is a graduate of the Ecole Nationale du Cirque professional coaching program and she been in leadership roles throughout the U.S. and Canada including: Toronto School of Circus Arts, Cirque du Monde, Cirkids, WiseFool, Banff Center for the Arts, Harbourfront Circus Camp, Monica's Danz Gym, aerial and acrobatics coach at NECCA and Winnipeg Children’s Festival. Her teaching experience ranges from professional level coaching to youth-at-risk programming. Rebecca specializes in aerial arts and also has a foundation in ground skills such as acrobatics, partner adagio, balancing and object manipulation. She integrates Pilate’s core-integration into her teaching approach and focuses on injury prevention, body balancing and the general health and longevity of the performer body. Utilizing her background in theatre, she has developed a questioning and image based creation process to refine and specify the artist’s vision. She frequently works with artists on integrating technique and creative vision, developing new works and techniques and refining previously existing creations. Rebecca Leonard is actively involved in the growing world of social circus and began working with Cirque du Monde in 2003. She has been working with Cirqiniq: regional Arctic social circus collaboration between Cirque du Soleil and the Kativik Regional Government of Nunavik since its inception in 2009 and currently works as a coach and organizer for the program through out the year. The Cirqiniq program is aimed at the youth at risk community and is working to create a model for a sustainable circus program in Nunavik. She has worked with Cirque du Monde Trainer of Trainers team, a group of trainers who are responsible for educating coaches in the Social Circus model created by Cirque du Soleil. In addition to her wide-ranging pedagogical engagements, she is happy to be part of Toronto based social circus project: SoCirc (Social Circus Cirle) and helping to develop the program since its inception in 2012, and action as a lead social circus facilitator and head of artistic programming.

Aside from her instructing and facilitation, Rebecca is an aerialist, actor, and choreographer, and performed locally and internationally with circus companies across Canada including Les Filles aux Lit, Hangtime, Circus Orange, HighStrung, Cirque Sublime, Cirque Eos, Lookup Theatre and Anti-Gravity since discovering circus in 1996. Feature film credits include The Tuxedo and Chicago. Rebecca is an honours graduate of Ryerson Theatre School. She has choreographed for numerous theatre productions. Leonard’s aerial performances have been featured at events including the Calgary Stampede, Fashion Cares, Just for Laughs Festival, Toronto Film Festival, CNE, and Vancouver Comedy Festival. In 2003 she founded A Girl In The Sky Productions, a theatrical circus company and began a journey of making shows using circus as one of the main story telling elements. Most recently she co-produced the collaborative interdisciplinary project Balancing on the Edge at Harbourfront Centre Theatre featuring over 30 artists from Thin Edge New Music Collective and a curated group of radical, curious and virtuosic circus artists interested in pushing boundaries and transforming the definition of what is New Circus. Rebecca is Co-Producer/Artistic Director of CCAFT-Contemporary Circus Arts Festival Toronto an annual circus festival in Toronto dedicated to the exploration of contemporary circus arts from a multi disciplinary perspective. The local festival is dedicated to the development of circus arts in Toronto through discussion forums, artistic collaborations and the mentor-ship of locally based circus and interdisciplinary artists through education opportunities and the presentation innovative performance.