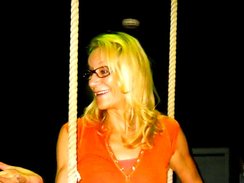 Marshaʼs career as a professional aerialist/acrobat began in 1977, touring throughout the U.S., Mexico and Canada with various circusʼ including Big John Strong, Kelly Miller, and Garden Bros. Other highlights of her professional performance career include appearances with the World Theatre Festival, the Hollywood Rose Bowl half-time shows and stints on The Johnny Carson Show.  Film and television credits include technical and creative consultant and stunt double roles for director/producers Norman Jewison, Tony Bill and Steven King. This phase of her career spanned over a decade before permanently settling in Toronto where she collaborated with Harbourfront Centre in 1988 to create the Harbourfront Circus Camps, which continue today.
Additionally, in 1991, she co-founded Ontarioʼs first Circus School, The Main Space School of Circus Arts offering a full menu of circus arts to children and adults. While maintaining the recreational programs offered by the school, she became drawn to the idea of using Circus Arts as a way of reaching Torontoʼs street youth. She collaborated with the Kites organization exploring ways to build self confidence and improve life skills of youth living on the fringes. This work proved highly successful and as a result Marsha took it a step further, creating workshops for abused women and flying trapeze workshops for the blind.
Fueled with the success of these projects, in 2001 Marsha teamed with Cirque du Monde, the Social Action and Responsibility department of Cirque du Soleil. There her interest in applied Social Circus strategies joined forces with other likeminded circus artists. The journey began in Quebecʼs Northern communities at the beginning of a collaboration with the Kativik Regional Government and Cirque du Soleil. The project continues today and has met intended goals throughout the years. Reaching further limits Marsha traveled the world for Cirque du Monde working with street youth in L.A. and the Bronx and to parts of impoverished Mongolia and South Africa.
Having had an ongoing working relationship with Rachel David, the founder of SoCirC (Social Circus Circle) for many years, helping to support and initiate the project and has worked several projects with the organization experiencing first hand the positive results achieved. Itʼs an honour and a privilege to be a part of this great team of talented professionals.